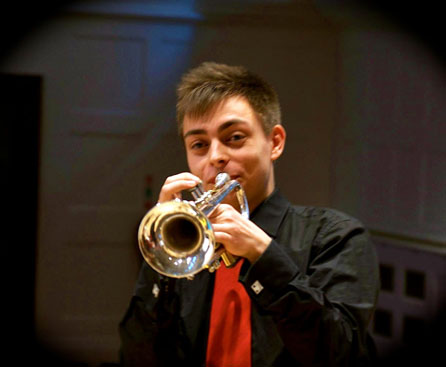 Tom Griffiths won Arun Musician of the Year in 2009 where he also picked up awards as a brass soloist and for best ensemble.

Tom writes “I began playing the cornet aged 9 when my next door neighbour, and chairman  of the village band, encouraged me to take up a brass instrument. I subsequently joined the West Chiltington Silver Band, who I still play with to this day, and later the West Sussex Music Service where I played with a  plethora of area based ensembles before eventually being appointed principal trumpet of the county orchestra.

For the next four years I attended the Junior Guildhall School of Music, where I was principal trumpet of both  the brass band and symphony orchestra. It was during my time at Guildhall I first entered AYM in 2009. I was lucky enough to come away with the prize for best instrumentalist, Arun Young Musician of the year as well as prize for best ensemble with my group Bayleaf Brass.  Since winning the competition in 2009 I have been fortunate enough to perform in and around Sussex on behalf of AYM and the Rotary Club and in 2010, was selected to travel to San Diego in 2010 and take part in the  International Youth Symphony Orchestra as their principal Trumpet.

Upon returning I began my studies at the Royal College of Music, where I am about to commence my fourth and final years study. During my time at the college I helped to set up the group Kensington Brass, who have  subsequently gone on to win the ensemble prize at the RCM, come runner up in the prestigious Royal Oversea’s League Ensemble prize and perform at venues including Southwark Cathedral and the Royal Albert Hall.  I also really enjoy education in music and currently teach both trumpet and piano across London. As well as this I work for the RCM Sparks and BBC Symphony Orchestra giving music based workshops to people from all walks of life. I am also the Brass Coach for the West Sussex County Orchestra.