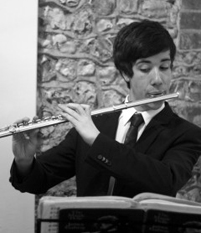 Andrew writes “I was so overwhelmed with how friendly, and how much of a supportive environment the festival was right from the first time that I auditioned in 2010, and my involvement led me to get many other opportunities to perform. I have played alongside local ensembles, for example the Littlehampton concert band, and had many other solo opportunities around the county. Through the Festival I have made a rich variety of friendships, which includes the vast majority of the AYM committee. The AYM has a fantastically welcoming vibe and at no point did I ever feel any sense of competition among the other players other than was completely healthy. This I think is a real value and a real credit to the organisation as a whole as it makes the festival unique among others I have been involved in as it is so thoroughly enjoyable.

Personally I always get a huge thrill from performance. I have always enjoyed performance on some level and through both AYM performances and others I have grown in confidence enormously and can happily chat away to an audience comfortably now. The AYM audiences always seemed to be just as friendly and welcoming as their superb committee members and I feel highly proud to have been able to be a part of it. Particularly as I think it has been a big part of my life over the past 4 years.  In the future I hope to go on to study at a top conservatoire, looking forward to a career as a top orchestral flautist. Currently I am on a double gap-year focussing on developing myself both personally and musically before going away to study. I have been making plans for further performances and gained fantastic support again from the AYM in this venture. I hope to always be a part of the AYM circle and may one day be a part of the committee myself. I can and would recommend it to anyone who has any interest in music at all.”